.
Since last night my young son has been unwell. When I got back from work this evening I decided to take him to hospital despite my exhaustion.

Some of those waiting had their eyes closed, while others were looking around. Most were bored. Once in a while the long silence was broken by a nurse calling out a number. Happiness appears on the one whose turn it is, and he gets up quickly; then silence returns.

A young man grabbed my attention. He was reading a pocket-sized Qur`an continuously; not raising his head even once. At first I did not think much about him. However, after one hour of waiting my casual glances turned into a deep reflection about his lifestyle and how he utilizes his time. One hour of life wasted! Instead of making benefit of that hour, it was just a boring wait. Then the call for prayer was made. We went to prayer in the hospital's masjid. I tried to pray close to the man who was reading the Qur'an earlier in the waiting room.
.

After the prayer I walked with him. I informed him of how impressed I was of him and how he tries to benefit from his time. He told me that most of our time is wasted without any benefit. These are days that go from our lives without being conscious of them or regretting their waste.

He said that he started carrying the pocket-sized Qur`an around when a friend encouraged him to make full use of his time. He told me that in the time other people waste he gets to read much more of the Qur`an than he gets to read either at home or in the masjid. Moreover, besides the reward of reading the Qur`an, this habit saves him from boredom and stress.
.

He added that he has now been waiting for one and a half hours. Then he asked, when will you find one and a half hours to read the Qur`an? I reflected; how much time do we waste? How many moments of our lives pass by, and yet we do not account for how they passed by? Indeed, how many months pass by and we do not read the Qur`an? I came to respect my companion, and I discovered that I am to stand for account and that time is not in my hand; so what am I waiting for?
. 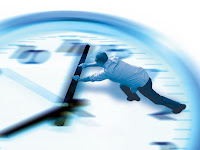 My thoughts were interrupted by the nurse calling out my number; I went to the doctor. But I want to achieve something now. I decided to be mindful of how I spend the time.
.
Our Prophet (SAW) said; 'Whoever guides or directs to good, then he gets the same amount of blessing (reward) as the one who does it'.
.
Quietly, I do hope PPB3K would direct people to good things in life.
Posted by miorazli@sssabasic at 10:27 PM