People say there is no difference between COMPLETE & FINISHED, but there is:

When you marry the right one, you are COMPLETE

And when you marry the wrong one, you are FINISHED

And when the right one catches you with the wrong one, you are ...


Story 2: Spielberg and a Chinese.

A Chinese walks into a bar in America late one night and he saw Steven Spielberg.

As he was a great fan of his movies, he rushes over to him, and asks for his autograph.

Instead, Spielberg gives him a slap and says, "You Chinese people bombed our Pearl Habour, get outta here."

The astonished Chinese man replied, "It was not the Chinese who bombed your PearlHarbour, it was the Japanese".

"Chinese, Japanese, Taiwanese, you're all the same," replied Spielberg.

In return, the Chinese gives Spielberg a slap and says, "You sank the Titanic, my forefathers were on that ship."

Shocked, Spielberg replies, "It was the iceberg that sank the ship, not me."

The Chinese replies, "Iceberg, Spielberg, Carlsberg, you're all the same."

An English professor wrote the words : "A woman without her man is nothing" on the chalkboard and asked his students to punctuate it correctly.
. 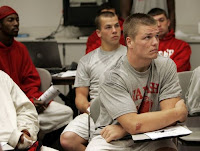 All of the males in the class wrote : "A woman, without her man, is nothing."
.

All the females in the class wrote : "A woman: without her, man is nothing."

So to conclude, punctuation is powerful!
.

PPB3K is the ‘punctuation’ of life!
Posted by miorazli@sssabasic at 6:40 PM