“Unconditional Love that which sees no barrier to race, color, creed, religion, caste and gender. Accepting the other person for what he or she is without any form of an expectation. Looking for goodness within others. It is through sacrifice and in giving that you make other realize. Creating the win-win situation. Forgiving and forgetting. Unconditional Love is Devine.”

Thinking about Unconditional Love, I can’t help but to remember Ginger, our house cat. He died about a month ago. To us, he is not a cat but simply the 7th member of our family. He has brought joy to our family. Ginger will be forever missed. I would like to share here an excerpt of an article about Ginger written by my daughter, Safia.
. 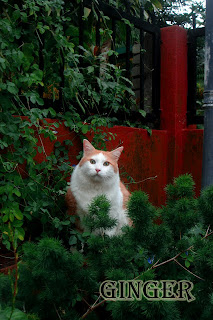 Once there is a family of six that consists of a Master, a Madam and their 4 children: Lady 1, Lady 2, Lady 3 and Young Master. They are a private family. They value their privacy and rarely accept outsiders into their circle for they love each other very much. However when Lady 1 turned 12, she received a kitten as a present. Unbeknownst to her, the kitten would soon grow up as a cat dragon.

Now what is this family of six going to do with this kitten? The Master has a fear of cats, Madam was dreading the future responsibility that would soon fall on her and the children were over the moon. And thus, the great life of Cat Dragon began...
What exactly is this Cat Dragon?

The Cat Dragon is one of a kind. In fact it can be said there is only one in this world. The cat dragon is extremely smart and full of badassery. Don't be fooled by his (yes, it's a HE.) cute and innocent looks for this cat dragon will take you down with its razor sharp claws (all hidden under those fluffy paws). He likes to play rough and will only be nice if he wants something or he's hungry. The Cat Dragon became cat dragon because of his confused upbringing. Living with six humans (who never owned a cat before) certainly damages a cat's natural instincts. The Cat Dragon is confused whether he is a cat or human. (Thus explains why Cat Dragon sometimes display human characteristics. This will be discussed later.)

Ginger is a very special cat. I'm willing to bet all of my money on his talents. Ginger's speciality lies in his unique personality and the human skills he picked up from the family. Seeing that Ginger had never lived with any of his kind, he is kinda weird. Sometimes he shows certain human-like skills.

He sleeps like a human. He loves the aircond and you will find him sleeping on Lady 3's bed with his head on the pillow and have the rest of his body covered with the comforter. He whines if somebody turned off the AC. :)

By some of his description, Ginger is very cunning. He doesn't follow what people say nor he will "layan" you like any other cats would. He is definitely not your average house cat. He will only "manja" to you if he wants something. He's hungry and you will see rubbing against your legs, basically wrapping himself around you or lick you or gives the softest and cutest meow. Also he acts most human in the middle of the night where if you talk to him, he'll respond. It's weird ... but even the Madam admits that she talks to Ginger when it's just the two of them at home.

As he gets older, I noticed that Ginger is getting more fluent with human language. You can ask whether he wants to drink or eat and he'll respond to you. He knows what you're about to do and will follow you if you're about to give him what you want. He knows if you're angry or sad. If you're angry, he'll get angrier than you. If you're sad, he'll get sadder than you. What about if you're happy? Well, he gets annoyed. He doesn't like it if you laugh too loud. You're just disturbing his beauty sleeps. Haha

That's Ginger for you.

Now what happens if Ginger is content? He will flat out ignore you. Seems harsh but that's what it is. He is the epitome of a playa, he plays with you to get what he wants and after all of that, he stomps all over your broken heart. And leaves a couple of scratches while he's at it. Haha.

Many people told us that we have the worst-behaved cat (Trust us, Ginger is banned from a couple of pet shops and vets due to his tantrums. Thus putting him for board can be difficult. But they don't understand the significance of Ginger. You can never find a more unique cat than this. Yes he might not be eligible to enter cat competitions (due to his personality) but he showed the family to be true to yourself. So what if you're spoiled or cunning or evil, the big question is whether you're happy. And I can proudly say that Ginger is the happiest cat that ever lived. :D

Ginger was a huge part of our childhood. Despite his diabolical ways, he was there when all of us needed something. Be it courage, confidence or love. I'm turning 22 this year and no longer a teen. I realized that he needed to go because he realized that the four of us are slowly leaving him. It's hard to admit but none of us are at home anymore. We grew up.

On the way to bury him at our family's estate, my father asked what has he taught us. I said maybe ... unconditional love. He taught us to love unconditionally especially between the seven of us. None of us expected anything from each other. We realized that the bond we share is special.

And it took us one special Cat Dragon to make us realize this.

We love you so much.Have fun in heaven you spoiled orange fur ball. :')

I dedicate this song as tribute to Ginger for teaching me the meaning of Unconditional Love. This song is performed by Safia’s friends, Zariq and Sylvia.

Posted by miorazli@sssabasic at 10:36 PM