When the sun went down and the room began to get dark, she noticed a large man walking toward her with a ball of fire on a stick. She suddenly realized that the man was going to set her on fire. "No, no!!" she cried, "Aaaaagghhh! Don't burn me,please!" But she knew that she could not be heard and prepared for the pain that would surely follow.

To her surprise, the room filled with light. She wondered where it came from since the man had extinguished his fire stick. To her delight, she realized that the light came from herself.

Then the man struck another fire stick and, one by one, lit the other candles in the room. Each one gave out the same light that she did. 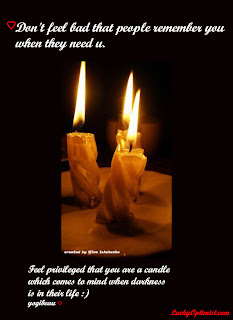 During the next few hours,she noticed that, slowly, her wax began to flow. She became aware that she would soon die. With this realization came a sense of why she had been created. "Perhaps my purpose on earth is to give out light until I die."

And that's exactly what she did. God created you and me to produce light in a dark world. Like that little candle, we all can produce the same amount of light, no matter how small we are or what color we might be. But we can't produce light until we create awareness in our life.

If you have difficulties to create awareness in your life, consider ‘Anda Dilahirkan Berjaya’ (ADB). Your perception of this life will be forever change! Your life will never be the same again! You will be a better person! Call me. (019-2245-079)

Posted by miorazli@sssabasic at 12:01 AM