The 'Blind Men and The Elephant' 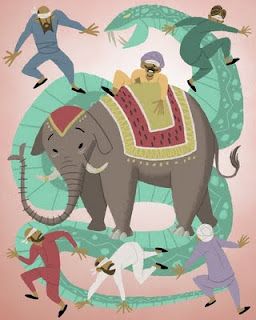 Six blind men were discussing exactly what they believed an elephant to be, since each had heard how strange the creature was, yet none had ever seen one before. So the blind men agreed to find an elephant and discover what the animal was really like.

It didn't take the blind men long to find an elephant at a nearby market. The first blind man approached the beast and felt the animal's firm flat side. "It seems to me that the elephant is just like a wall," he said to his friends.

The fourth blind man was of course by now quite puzzled. So he reached out, and felt the elephant's leg. "You are all talking complete nonsense," he said, "because clearly the elephant is just like a tree."

Utterly confused, the fifth blind man stepped forward and grabbed one of the elephant's ears. "You must all be mad - an elephant is exactly like a fan." Duly, the sixth man approached, and, holding the beast's tail, disagreed again. "It's nothing like any of your descriptions - the elephant is just like a rope."

And all six blind men continued to argue, based on their own particular experiences, as to what they thought an elephant was like. It was an argument that they were never able to resolve. Each of them was concerned only with their own idea. None of them had the full picture, and none could see any of the other's point of view. Each man saw the elephant as something quite different, and while in part each blind man was right, none was wholly correct.

There is never just one way to look at something - there are always different perspectives, meanings, and perceptions, depending on who is looking.

Posted by miorazli@sssabasic at 3:55 PM