The Lock and Key Story 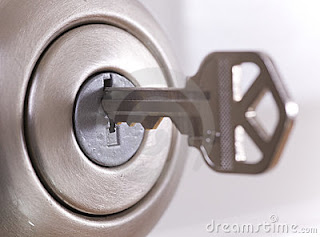 A British family were on holiday in a rented motor-home in the USA. Travelling through California they visited the Magic Mountain amusement park close by Los Angeles. Mid-afternoon, halfway through what was turning out to be a most enjoyable day at the park, Mum, Dad and the three kids came upon a particularly steep plummeting ride.

In the queue, the ride attendants strongly warned everyone about the risks of losing hats, spectacles, coins and keys, etc., and these warnings were echoed by large signs around the ride. During the ride, Dad lost the keys.

Due to the fact that the motor-home was a replacement vehicle resulting from a breakdown earlier in the holiday, there were no spare keys. And there were six keys on the lost bunch: ignition, front doors, side door, fuel tank, propane tank, and storage cupboards.

The park attendants drove the family back to the motor-home, suggesting the least damaging ways to break into it.Fortunately a window had been left slightly open, enabling the middle son to be put in and to open the doors from the inside.

Inside the motor-home Mum and Dad discussed what to do. They were stranded. Middle son (all of six years old) said he'd got a key - said he'd found it - but no-one was listening properly. "Perhaps it will fit, I'll get it." (The optimism of young children of course knows no bounds.)

Not thinking for one second that little lad's key would fit, Dad tried it. Incredibly the key fitted the ignition - and the driver's door. Middle son is a hero. It seems he'd found the key in a cupboard when packing his clothes soon after the motor-homes were swapped after the first vehicle broke down.

The next day back at the camp site, Dad called a local locksmith to see what could be done. "I might be able to make new keys from the locks, if you bring the vehicle to me," said the locksmith, so the family drove to the locksmith, whose business was in a small shopping centre in the California countryside.

The locksmith looked at the motor-home, and said he'd try. "If you come back in an hour I'll know better what I can do for you." The family went to the nearby shops and a coffee bar to pass the time. Dad returned to the locksmith to see how things were going. The locksmith says he thought he could make new keys for all the locks, but it would be a long job.

In fact the job took the locksmith most of the day. The family hung around the locksmiths, visited the shops again, and generally made a day of being at the little shopping centre. While working on the locks and the keys, the locksmith talked with the family about England, about America, about the rides at Las Vegas, about motor-homes, about business, about locks, about families and kids, about lots of things.

Late on in the afternoon the locksmith said that he'd nearly done - "But you have time to go get something to eat if you want. When you come back I'll be done." So the family went to a burger bar for something to eat. An hour later the family returned to the locksmith's shop. It was 4pm and they'd been at the shopping centre since 10.00 in the morning.

When Dad entered the locksmith's shop the locksmith was smiling. He put two new gleaming bunches of keys on the counter. "Here you go - a new set of keys for all the locks, and a spare set too," said the locksmith, "And I tell you what I'm going to do..."

"You know, I've had such a great time with you guys today," says the locksmith, "You can have these for free."

What do you learn from the story?

Posted by miorazli@sssabasic at 3:20 PM