A traveler coming into a town beset by famine. The inhabitants try to discourage the traveler from staying, fearing he wants them to give him food. They tell him in no uncertain terms that there's no food anywhere to be found. The traveler explains that he doesn't need any food and that, in fact, he was planning to make a soup to share with all of them.

The villagers watch suspiciously as he builds a fire and fills a cauldron with water. With great ceremony, he pulls a stone from a bag, dropping the stone into the pot of water. He sniffs the brew extravagantly and exclaims how delicious stone soup is. As the villagers begin to show interest, he mentions how good the soup would be with just a little cabbage in it. A villager brings out a cabbage to share. 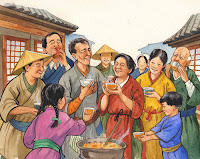 This episode repeats itself until the soup has cabbage, carrots, onions, and beets-indeed, a substantial soup that feeds everyone in the village.

This story addresses the human tendency to hoard in times of deprivation. When resources are scarce, we pull back and put all of our energy into self-preservation. We isolate ourselves and shut out others. As the story of stone soup reveals, in doing so, we often deprive ourselves and everyone else of a feast.

This metaphor plays out beyond the realm of food. We hoard ideas, love, and energy, thinking we will be richer if we keep to them to ourselves, when in truth we make the world, and ourselves, poorer whenever we greedily stockpile our reserves. The traveler was able to see that the villagers were holding back, and he had the genius to draw them out and inspire them to give, thus creating a spread that none of them could have created alone. 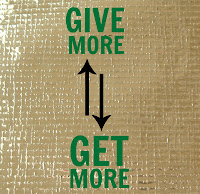 Are you like one of the villagers, holding back? If you come forward and share your gifts, you will inspire others to do the same. The reward is a banquet that can nourish many. Remember, the more you give, the more you get!

Posted by miorazli@sssabasic at 10:57 AM