Dog and the Donkey: Management Lesson 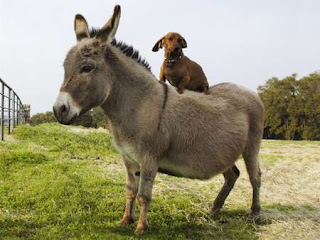 There was once a washer man who had a donkey and a dog. One night when the whole world was sleeping, a thief broke into the house, the washer man was fast asleep too but the donkey and the dog were awake. The dog decided not to bark since the master did not take good care of him and wanted to teach him a lesson.

The donkey got worried and said to the dog that if he doesn't bark, the donkey will have to do something himself. The dog did not change his mind and the donkey started braying loudly.

Hearing the donkey bray, the thief ran away, the master woke up and started beating the donkey for braying in the middle of the night for no reason.

Now take a new look at the same story...

The washer man was a well educated man from a premier management institute. He had the fundas of looking at the bigger picture and thinking out of the box. He was convinced that there must be some reason for the donkey to bray in the night.

He walked outside a little and did some fact finding, applied a bottom up approach, figured out from the ground realities that there was a thief who broke in and the donkey only wanted to alert him about it. Looking at the donkey's extra initiative and going beyond the call of the duty, he rewarded him with lot of hay and other perks and became his favourite pet.

The dog's life didn't change much, except that now the donkey was more motivated in doing the dog's duties as well. In the annual appraisal the dog managed "ME" (Met Expectations).

Soon the dog realized that the donkey is taking care of his duties and he can enjoy his life sleeping and lazing around. The donkey was rated as “star performer". The donkey had to live up to his already high performance standards.

Soon he was over burdened with work and always under pressure and now is looking for a NEW JOB ... :)

Posted by miorazli@sssabasic at 4:12 PM