When I was in elementary school, I got into a major argument with a boy in my class. I have forgotten what the argument was about, but I have never forgotten the lesson I learned that day. 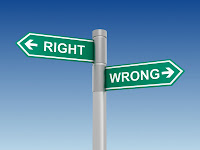 She brought us up to the front of the class and placed him on one side of her desk and me on the other. In the middle of her desk was a large, round object. I could clearly see that it was black. She asked the boy what color the object was. “White,” he answered.

I couldn’t believe he said the object was white, when it was obviously black! Another argument started between my classmate and me, this time about the color of the object.

The teacher told me to go stand where the boy was standing and told him to come stand where I had been. We changed places, and now she asked me what the color of the object was. I had to answer, “White.”

It was an object with two differently colored sides, and from his viewpoint it was white. Only from my side it was black.

Sometimes we need to look at the problem from the other person’s view in order to truly understand his/her perspective.

Posted by miorazli@sssabasic at 10:32 PM