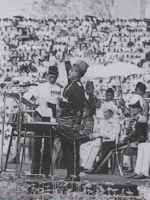 In 1954 Abdul Rahman led a delegation to London to seek independence for Malaya, but the trip proved to be unfruitful. In the following year, the first federal general election was held, and the Alliance Party (Perikatan), a coalition of UMNO, the Malayan Chinese Association (MCA) and the Malayan Indian Congress (MIC) won fifty-one out of the fifty-two seats contested. Abdul Rahman was elected as Malaya's first Chief Minister. The Alliance was later joined by the Malayan Indian Congress (MIC) in 1955, representing the Indian community.

Later in 1955 Abdul Rahman made another trip to London to negotiate Malayan independence, and 31 August 1957, was decided as the date for independence. When the British flag was lowered in Kuala Lumpur on independence day, Abdul Rahman led the crowd in announcing "Merdeka!" (freedom!). Photographs of Abdul Rahman raising his hand, and recordings of his emotional but determined voice leading the cheers, have become familiar icons of Malaysian independence.

Abdul Rahman dominated the politics of [[independent (nation)|independent Malaya (which became Malaysia in 1963), and led the Alliance to landslide wins in the 1959, and 1964 general elections.

The formation of Malaysia was one of Abdul Rahman's greatest achievements. In 1961 he made a speech at the Foreign Correspondents Association of Southeast Asia in Singapore, proposing a federation Malaya, Singapore, Sabah, Sarawak, and Brunei. On 16 September 1963, with the federation of all these states except Brunei, Abdul Rahman was formally restyled Prime Minister of Malaysia.

However, the racial factor was worsened with the inclusion of Singapore, which increased the Chinese proportion to close to 40%. Both UMNO and the MCA were nervous about the possible appeal of Lee Kwan Yew's People's Action Party (PAP, then seen as a radical socialist party) to voters in Malaya, and tried to organise a party in Singapore to challenge Lee's position there. Lee in turn threatened to run PAP candidates in Malaya at the 1964 federal elections, despite an earlier agreement that he would not do so (see PAP-UMNO relations).

This provoked Abdul Rahman to demand that Singapore withdraw from Malaysia. On 7 August 1965, Abdul Rahman announced to the Parliament of Malaysia in Kuala Lumpur that the Parliament should vote yes on the resolution to have Singapore to leave the Federation, choosing to "sever all ties with a State Government that showed no measure of loyalty to its Central Government" as opposed to the undesirable method of repressing the PAP for its actions. Singapore's secession and independence became official on 9 August 1965

At the 1969 general election, the Alliance's majority was greatly reduced. Demonstrations following the elections sparked the May 13 racial riots in Kuala Lumpur. Some UMNO leaders led by Tun Abdul Razak were critical of Abdul Rahman's leadership during these events, and an emergency committee MAGERAN took power and declared a state of emergency.

Abdul Rahman's powers as Prime Minister were severely curtailed, and on 22 September 1970, he was forced to resign as Prime Minister in favour of Tun Abdul Razak. He subsequently resigned as UMNO President in June 1971, in the midst of severe opposition of the 'Young Turks' comprising party rebels such as Mahathir Mohammad and Musa Hitam. The duo later became Prime Minister and Deputy Prime Minister of Malaysia respectively.

Posted by miorazli@sssabasic at 9:03 PM