An American man walked into a restaurant in London. As soon as he entered, he noticed an African man sitting in the corner. 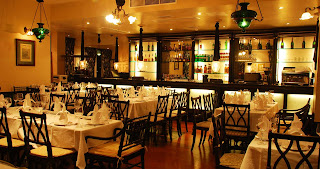 So he walked over to the counter, removed his wallet and shouted, "Waiter! I am buying food for everyone in this restaurant, except that black African guy over there!"

So the waiter collected the money from the man and began serving free food to everyone in the restaurant, except the African.

However, instead of becoming upset, the African simply looked up at the American and shouted, "Thank you!" That infuriated the man. So once again, the American took out his wallet and shouted, "Waiter! This time I am buying bottles of Fanta and additional food for everyone in this restaurant, except for that African sitting in the corner over there!" So the waiter collected the money from the man and began serving free food and Fanta to everyone in the bar except the African.

When the waiter finished serving the food and drinks, once again, instead of becoming angry, the African simply smiled at the American man and shouted, "Thank you!"

That made the American man furious. So he leaned over on the counter and said to the waiter, "What is wrong with that African man? I have bought food and drinks for everyone in this restaurant except him, but instead of becoming angry, he just sits there and smiles at me and shouts 'Thank you.' Is he mad?"

The waiter smiled at the American and said, "No, he is not mad. He is the owner of this restaurant.

May your enemies work unknowingly in your favour.

Stay away from Anger. It hurts .. . Only You!
If you are right then there is no need to get angry,
And if you are wrong then you don't have any right to get angry.
Patience with family is love,
Patience with others is respect.
Patience with self is confidence and Patience with GOD is faith.
Never Think Hard about the PAST, It brings Tears.
Don't think more about the FUTURE, It brings Fear.
Live this Moment with a Smile, It brings Cheer.
Every test in our life makes us bitter or better.
Every problem comes to make us or break us.
The choice is ours whether we become victims or victorious.
Beautiful things are not always good but good things are always beautiful.

Do you know why God created gaps between fingers?
So that someone who is special to you comes and fills those gaps by holding your hand forever.


Happiness keeps you sweet but being sweet brings happiness.

Posted by miorazli@sssabasic at 8:48 AM