A Success Story of 99 Speedmart Owner 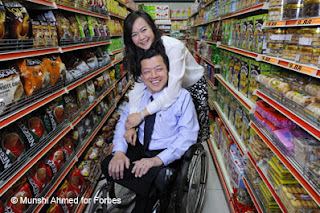 His handicap becomes his forte. A star is born.

Some people blame their circumstances as why they are not successful. But not Lee Thiam Wah.

Unknown to most people, the owner of 99 SpeedMart, dubbed 'The King of MiniMarts' was struck with polio at an early age, and it bound him to the wheelchair for the rest of his life.

Being born into a lower income family, Lee did not enjoy the support and helot that kids with his affliction should have been given. His father was a construction worker, and his mother was a hawker, so he did not lead a luxurious life.

But it was what Lee despite of his circumstances that got the international business community to take notice, earning him an exclusive profile in Forbes magazine.

His parents had to provide for 11 children, so it comes as no surprise that Lee only finished 6 years of school, as they could not afford to send him to school anymore.

But Lee did not use this as a reason for him to be lazy, and just accept his circumstances. After he finished school prematurely, he read books borrowed from neighbors, and sold snacks in a roadside stall to occupy his time.

Lee said that he had to do all this, as a way to help himself.

“I have to help myself. Nobody would hire me due to my physical limitation,” he says.

His never say die attitude was forged by his grandmother, who used to tell him "If you dont work hard, what will you amount to?"

By the time he was 23, he saved RM 5000, which was just enough to start a grocery stall. So he began his retail education.

He said that he learned through experience, more than anything.

“I learned what customers buy. I know all the suppliers and their pricing. And I studied my competitors thoroughly," says Lee.

Lee said that he came to this decision because he wants a challenge.

During the Forbes interview in 2010, it was reported that Lee's business was already rakingi n RM 150 million annually and employs 2000 people in Malaysia.

Lee Thiam Wah is a real success story, and he has shown to everyone that even physical disability cannot stop pure passion, grit, and perseverance.

Posted by miorazli@sssabasic at 10:18 AM